Balder was adopted on 18.09.2009 in the two centers of excellence:
1. CO NIN - center of nanoscience and nanotechnology
2. CO Namaste - center of advanced non-metallic materials with the technologies of the future.

Within, the company Balder show success in the world with scientific work and international competitiveness in developing new products. Admission to the Center of Excellence means for the company Balder significant scientific, but also immense of technological importance and among the other things means a business opportunity and a very good platform for success in the future. 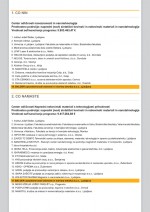